AIA Forecast for Non-Residential Construction Strong for 2015 and Beyond 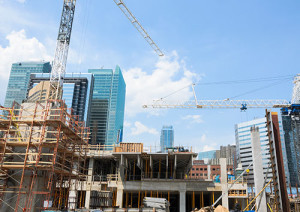 Construction spending forecasts are also a forward-looking indicator for all design professionals. What does the latest AIA Construction Forecast in non-residential sectors indicate for 2015 and 2016?

If you are architect or engineer whose work is in the non-residential sector, the most recent AIA Construction Spending forecast has good news. Experts surveyed by the AIA expect the upsurge in commercial construction projects that began in the later part of 2014 to continue. In addition, this latest AIA nonresidential construction forecast is the first one since the onset of the Great Recession in which all sectors showed growth in spending. Which sectors are leading this growth and what can design professionals expect in 2016?

Hotel Construction is the Anticipated Growth Leader in 2015

Looking Forward to 2016
While a number of factors, such as employment, the international economic climate, and interest rates, may have an effect on non-residential construction, experts predict spending in this section will increase by 8.2 percent in 2016. This growth is likely to be driven by an increased demand for healthcare and educational institution construction. Based on this forecast, both architects and engineers can look forward to the strongest demand for their services in almost a decade.