Architecture and Engineering: San Francisco Joins Pisa with Its Own Leaning Tower- Part I 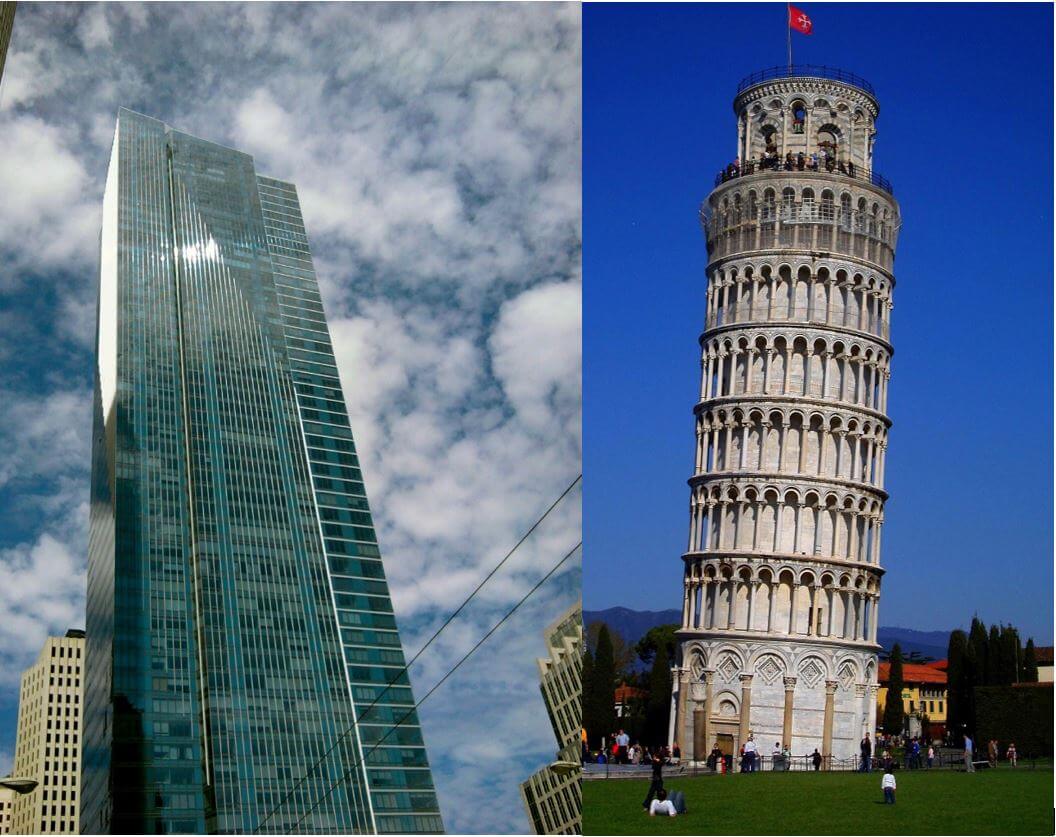 While San Francisco’s Millennium Tower does not have quite the pronounced lean of the famous bell tower in Pisa, the excessive settling of the Bay area’s high-priced luxury condo tower has residents questioning the safety of the building.

While, at first glance, it does not seem like Pisa’s famous 11th-century bell tower and one of the San Francisco’s most recognized high-end residential skyscrapers have much in common, they actually share one characteristic – a distinct lean. Remarkably, the cause of the tilt of both structures appears to be the same – the design and/or construction of the foundation are flawed, the towers were built on soft soil, and they were both constructed over a water table. Fortunately, the Millennium Tower, which opened for occupancy in 2009, currently only deviates 2 inches from vertical. In comparison, the Leaning Tower of Pisa leans 12’10” from vertical.

During the last decade of the 20th century, engineering plans to stabilize Pisa’s tower were implemented and appear to have prevented further leaning. Unfortunately, despite an investment of $58 million by the Transbay Joint Powers Authority (TJPA) to design and build a buttressing system in 2010 to prevent further leaning of the Millennium Tower, the residential skyscraper continues to sink. While the TJPA attributes the structure’s 16 inches of uneven settling to problems with the foundation, the developers of the Millennium Tower claim the sinking is the result of the TJPA pumping too much groundwater during the initial stages of the construction of its Transit Center located next door to the Millennium.

Caught in the middle of the dispute are the owners of Millennium apartments who have spent from $1.6 million to $10 million++ for their units. In light of their investment and concern about the structural integrity of their building, the residents of the Millennium Tower have filed a lawsuit against the developers and the TJPA.  In addition, the San Francisco Board of Supervisors has started hearings to determine what the Department of Building Inspection (DBI) knew about the settling issues and the reason the DBI issued a certificate of occupancy for the building. Furthermore, the San
Francisco City District Attorney
has subpoenaed the developers of the Millennium to determine whether they failed to notify the buyers of the apartment units of the settling issues.

Given all the litigation, one would think that problems with the plans for the skyscraper, especially the foundation, would have been noticed prior to construction; however, the engineering firm that designed the project won numerous awards for their work. In addition, they also published their plans and testing for the design of the Millennium Tower in a peer-reviewed journal. Since the engineering firm appears to have vetted their plans well, what went wrong?

The Perils of Building on Soft and Shaky Ground 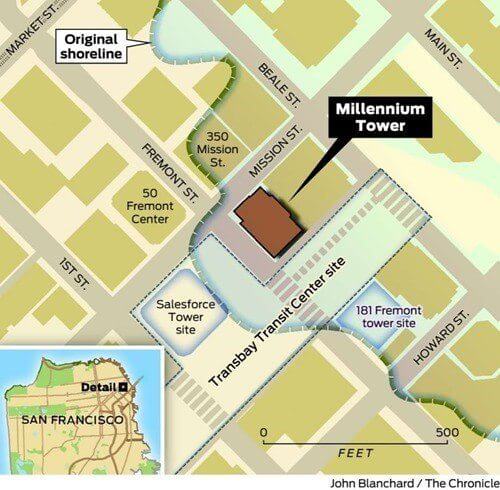 The site where the Millennium Tower sits is filled land, which is intrinsically softer than other areas in San Francisco

The Millennium Tower is located in San Francisco’s Mission District, which is mostly filled-in ground, according to the San Francisco Chronicle. An analysis on the website Temblor suggests that the soft sandy substrate is subject to undergoing a process similar to liquefaction, which they propose is the likely reason for the settling and lean of the Millennium Tower.  This conflicts with the developer’s position that the residential was constructed according to code using 900 friction piles driven between 60 to  91 feet into the dense mud. According to the developer, the tower is sinking due to the dewatering of the TJPA’s Transit Center construction site. TJPA counters that they notified the developer in 2010 that the Millennium Tower had already exceeded the engineer’s estimate of the settling to expect for the life of the building. Today, the building has settled a total of 16 inches. TJPA asserts they monitored their excavation work and sent reports to the developers.  Additionally, the TJPA states that the foundation of the structure should have been anchored 200 feet into the bedrock.

Part Two of these series will explore one engineer’s solution to San Francisco’s leaning tower. After reviewing the links in this post, what solution would you suggest?