Even though the design for what may become the Upper West Side’s tallest tower is receiving accolades in the trade media, current residents warn they will oppose the project.

Since 2013, the Municipal Art Society has raised concerns about the shadows cast on to Central Park by new supertall towers. Image Credit: Ed Yourdon via Wikimedia Commons.

Even though New York City is historically known for its iconic skyline of skyscrapers, some Manhattan residents and advocacy groups, such as Landmark West, are saying the latest round of supertall towers are adding too much mass, density, and height to their neighborhoods. At the same time, the feats of architecture and engineering design involved in planning and constructing these skyscrapers bring recognition from the trade media and developers alike. The latest design released by the Norwegian architectural firm Snøhetta is no exception – the architectural world has given high praise for the lines and forms illustrated in the latest plans for what might become the Upper West Side’s tallest tower while people who live nearby are promising to fight to prevent the plans from being realized. What features are unique to Snøhetta’s design for the tower? What reasons do residents give for opposing the project?

Snøhetta: The Firm and Their Proposed Design for the Upper West Side’s Tallest Tower 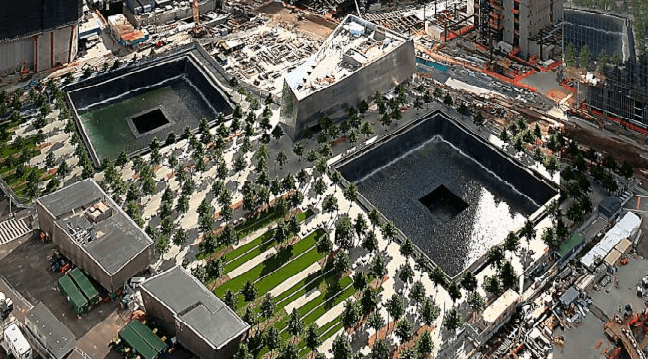 Snøhetta designed the pavilion at the National September 11 Memorial Museum, shown under construction in this 2012 photo. Image Credit: Cadiomals via Wikimedia Commons.

The Norwegen architectural design firm is no stranger to projects in New York City or the United States. Examples of some of their US projects and current proposals include:

Their latest design, commissioned by Extell Development, is for a 775-foot residential tower on 66th Street sited above a synagogue that faces 65th Street. According to ArchDaily, the goal of the design is to give recognition to its historic surroundings, which include Central Park and Lincoln Center, by their use of complex lines and forms. The primary materials Snøhetta chose for the exterior of their building include textured limestone, burnished bronze, and glass.

As the height of the building increases, carved out sections of the tower limit some of the massing of the structure in an effort to keep the structure at a “human scale” near ground level.

At the 16th floor, the tower “splits” to give way to an intricately landscaped amenity terrace. Above the 16th floor, the “excavated” lines of the building provide space for private balconies. According to Snøhetta, the carved form of the facade of 50 West 66th Street are to give homage to NYC’s geologic legacy.

Residents of the Upper West Side, especially those living near Lincoln Center and Central Park, want to prevent the creep of Midtown’s supertall towers, such as this one at 429 Park Avenue, into their neighborhoods. Image Credit: Fashawks8 via Wikimedia Commons.

The issues raised by advocacy groups and public officials include the following:

While final plans have yet to be filed, the developer plans to commence construction in 2018.

What is your opinion of the plans for 50 West 66th Street? How would you handle opposition to the project?