Replacing a bridge that is part of an already-congested interstate is challenging; add in the restrictions of constructing the replacement span over an environmentally waterway and forest, task may seem to be impossible. Learn how a team engineered innovative solutions to overcome these obstacles. 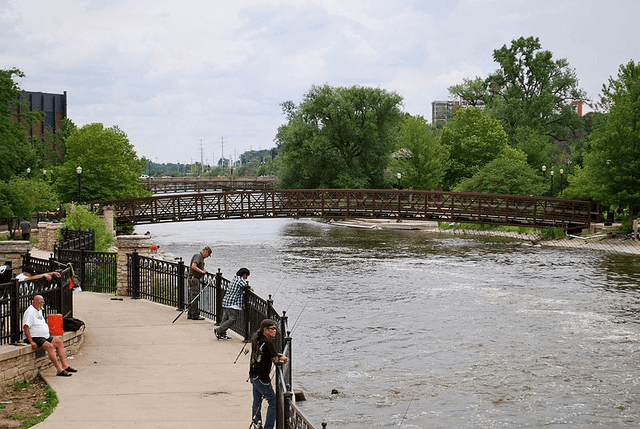 The Fox River, as seen from the riverwalk, is one of the defining features of Elgin, Illinois. Image Credit: Ronincmc via Wikimedia Commons.

As part of its $15 billion capital investment in improving mobility, the directors of the Illinois Tollway announced one the projects included in its Move Illinois program would be to contract for the widening and or replacement of the Fox River Bridge. The work on this span, which at 1315 ft is the longest and largest twin bridge along this 62 mile section of I-90, was part of an effort to transform the highway into a 21st-century transportation corridor. Additionally, this section of the Jane Addams Memorial Tollway serves as a major traffic throughway for 101,000 vehicles per day, linking Wisconsin as well as 16 northwestern Illinois counties and 32 towns, cities, and villages to Chicago’s O’Hare International Airport. With a $95 million budget, the project was certainly lucrative, it also posed significant challenges according to an article written by the two principal engineers, Scott Eshleman, P.E., S.E., and Rob Koss, P.E., who worked on the project for the award-winning Chicago-based firm Stanley Consultants.

A Multitude of Challenges Requiring New Approaches to Bridge Engineering

Examples of some of the issues faced by the engineering team that begged for innovative solutions include the following:

Successful Implementation of New Methods of Bridge Engineering and Construction

The work of the engineering team preserved the habitat of the rare, but not yet endangered river redhorse. Image Credit: Ellen Edmonson and Hugh Chrisp via Wikimedia Commons

To meet the technical specifications and the environmental constraints of the project, the engineering team and their contractors developed and successfully used the following innovative approaches to interstate highway bridge construction:

Learn more about the new bridge design and construction techniques developed by the engineering team by reading Built from Below.

See this innovative work in action by watching this time lapse video:

What other solutions can you engineer to overcome the obstacles for completing this project?