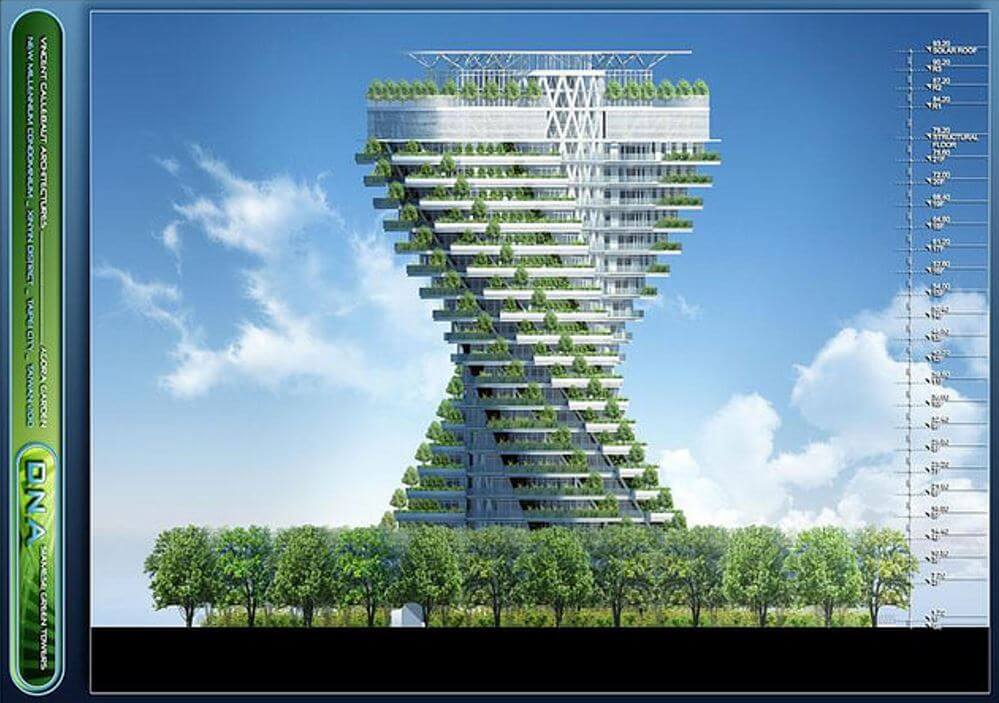 Like many urban centers across the globe, Taipei struggles with dangerously high spikes in air pollution. According to the Taipei Times, the level of particulate matter in the air reached hazardous levels in April 2016, which forced those with respiratory issues to remain inside while others in the city limited their time outdoors. Additionally, a grayish haze blanketed Taipei. In average, the air pollution level in Taipei is considered moderate by the World Health Organization. 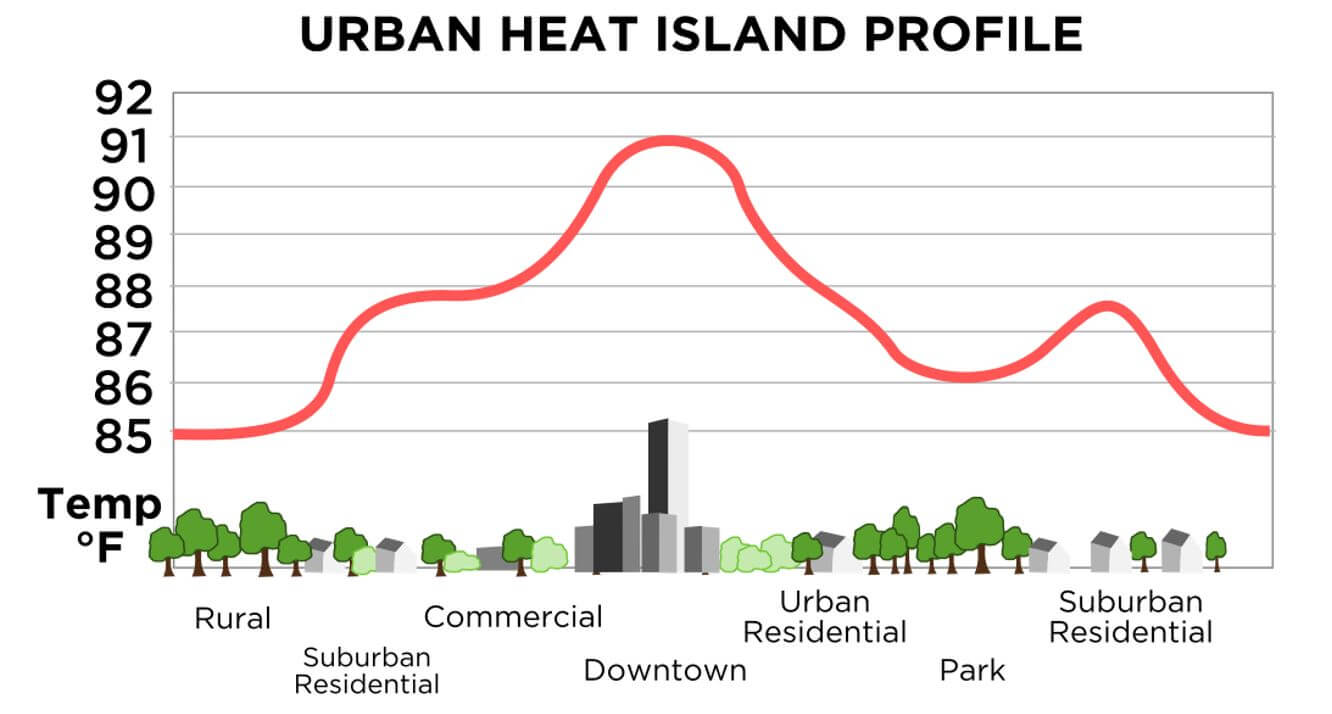 The higher temperatures in the cities cause more than discomfort for urban dwellers and the heat island effect has the potential to be deadly.  Some of the health effects associated with spikes in city temperatures cited by the EPA include heat strokes, heat cramps and exhaustion, dehydration, and heat-related deaths. Between 1979 and 2003, the 8,000 premature deaths that occurred each year exceeded those attributed to hurricanes, lightning strikes, tornadoes, and flooding combined.

A recent study published in the Taipei Journal of Public Health cited by the Taipei Times found the urban heat island effect poses an unexpected danger for the elderly – an increased risk of suicide. The researchers’ data analysis revealed that for every 10 C (33.8 o F) increase in air temperature, the suicide of people aged 65 years and older increases by 5.49 percent. During the period 2001 to 2008, 1785 deaths of individuals 65 years old and above were attributed to suicide.

As global temperatures continue their upward trend, the need to mitigate and reduce urban temperatures becomes increasingly urgent. The design of an urban residential tower, the Tao Zhu Yin Yuan Tower in Taipei, presents one method to ease the heat island effect in a dense urban city center. What is unique about the design and engineering of this luxury high-rise residential apartment building? 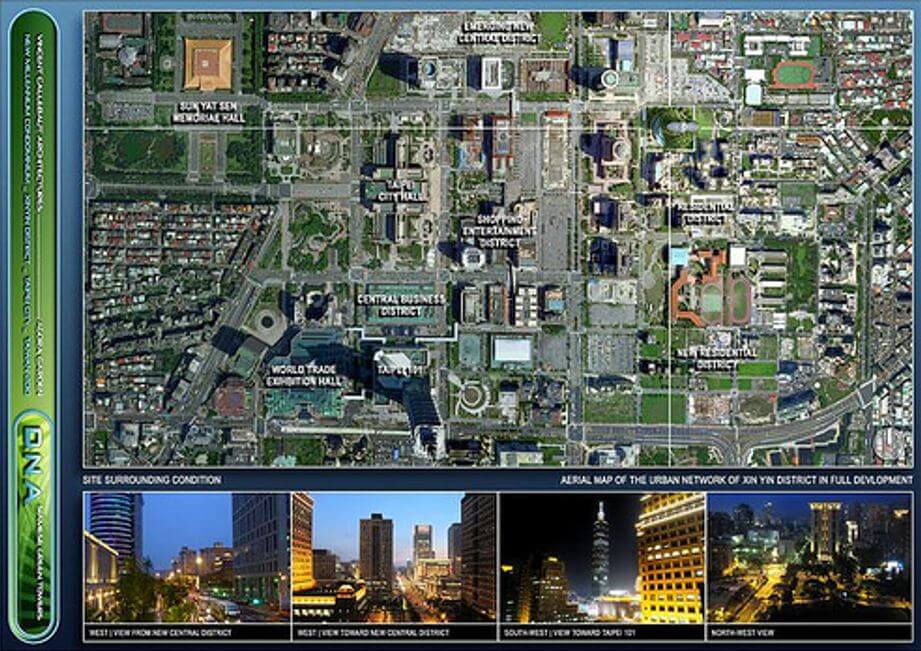 The LEED Gold and Low Carbon Building Alliance Diamond Level-rated Taipei residential tower, designed by Vincent Callebaut, is innovative in both its form and function. The 21-story luxury apartment tower is surrounded by a double-helix, inspired by the structure of DNA. It holds both balconies and suspended gardens that contain more than 23,000 plantings, which is the same of those present in New York City’s Central Park. According to Business Insider, Callebaut states that the numerous trees, plants, and shrubs will absorb 130 tons of carbon dioxide, a greenhouse gas linked to significant environmental warming. As a result, the combination of the vegetation absorbing the amount of CO2 produced by 27 cars and the cooling effects of the urban forest, gardens, and green rooftops will reduce the urban heat island effect in Taipei considerably.

One of the reasons the Tao Zhu Yin Yuan Tower has garnered so much press attention is its unique double-helix design. Each strand of the helix, which serves as the steel exoskeleton of the tower, holds suspended gardens planted with vegetables, herbs, and aromatic flowers, as well as the balconies that have both orchards and gardens. Callebaut explains in his proposal that the inspiration for this design is the structure of DNA, which is the fundamental building block for all forms of life.

The practical reasons for Callebaut used the 90-degree twisting design for this upscale residential tower include:

In Vincent Callebaut’s conceptual design proposal for the Tao Zhu Yin Yuan Tower,  he outlined four ecological objectives he planned to achieve with his design for this luxury residential tower. These objectives are as follows: 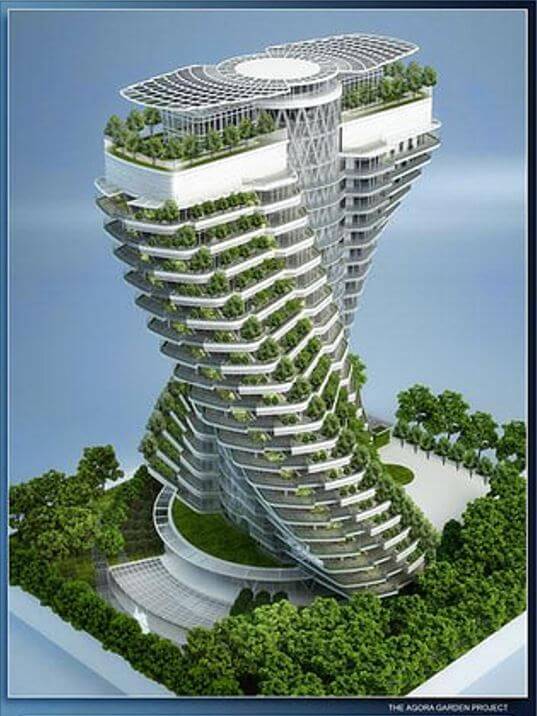 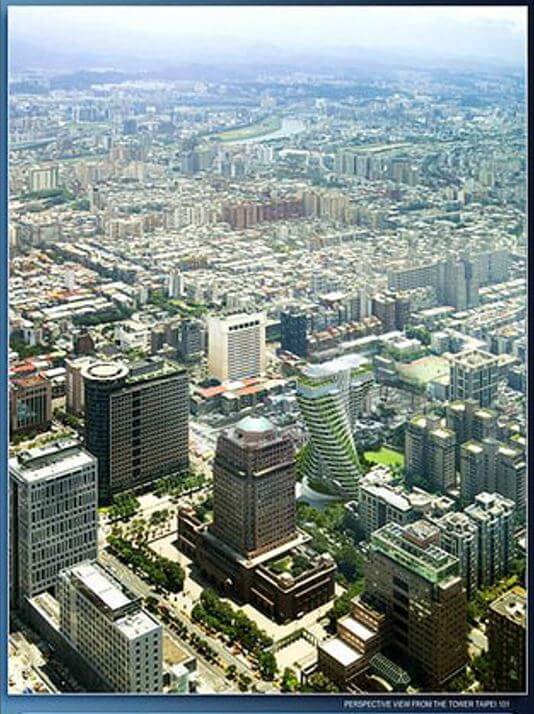 The urban forest and glade surrounding the Tao Zhu Yin Yuan Tower not only provides a welcome escape from the concrete sidewalks and congested streets of Taipei’s central business district, but the vegetation also acts as an urban carbon sink. Additionally, the plants capture particulate matters thus they serve as natural air filters. The densely planted trees also mute the noise prevalent in the city, while the aquatic glade offers a relaxing soundscape.

The lobby of the tower soars two stories in height and its transparent façade provides residents and their guests a seamless transition between the indoor and outdoor environments. While each level of the structure offers a crystal-like face, the multi-layer glass with self-contained blinds protects the interior from the heat of the summer sun and act as insulation from the cold of winter. The extensive use of glass in the structure also maximizes natural light, thus limiting the use of power consuming artificial illumination.
The hanging gardens and landscaped balconies act as urban vertical farms that provide apartment owners with a ready source of organically grown fruit and vegetables as well as fragrant herbs, medicinal plants, and flowers. Roof top rain barrels and gray water recycling systems provide sustainable sources of water for the gravity-driven irrigation systems. The orchards and shrubs offer birds natural nesting areas, while the flowers attract bees and butterflies that act as pollinators for the vegetable garden. The roof of the Tao Zhu Yin Yuan Tower has two clubhouses topped with photovoltaic cells as well as sky gardens and rain barrels.

While the tower requires little use of outside energy sources, its residents are able to enjoy the use of four high-speed elevators. Additionally, a car elevator not only takes autos to one of the two glass sky garages but also makes moving furniture and even pianos easy.  The spacious square footage of the units is flexible, allowing the apartment owners to separate the space as they desire.

Construction began on the Tao Zhu Yin Yuan Tower in 2013 and it is on schedule for completion in September 2017.

What is your opinion about Callebaut’s design? How do you think Americans would respond to a similar residential tower being proposed in their city?