Engineers have been stabilizing the ground for centuries – even the Romans did it – but all the common methods used today come at a high cost and aren’t very environmentally friendly. Recent studies have been looking at new, cleaner ways to achieve that same stabilization. 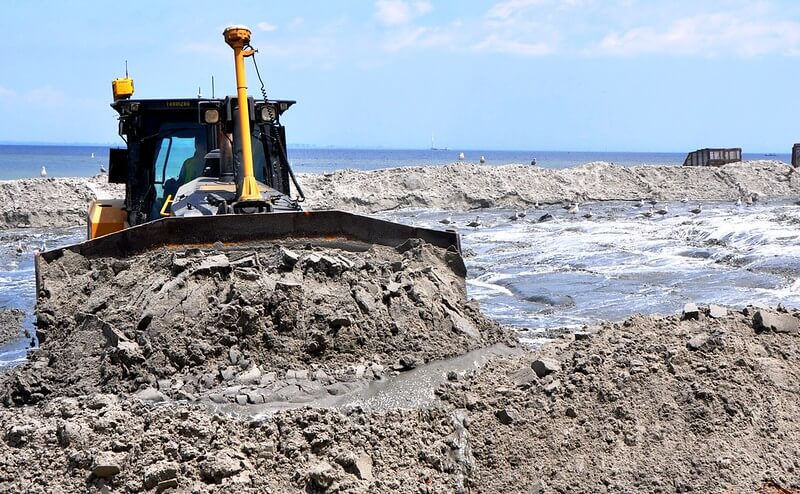 Ground improvement is a way to stabilize land that was previously unsuitable for construction. As the world’s population increases, we will be hunting more and more for land to develop – necessitating the use of land with soil poorly suited for construction.

For some developers, they just want to be able to build wherever is the most appealing – like along coasts. Marine soil has a high fine-grained soil content and a high in-situ water content. Both properties equal low shear strength and bearing capacity – leading to large settlements if construction is attempted with no soil amendments.

Most geotechnical engineers use either mechanical compaction or chemical grouting to improve the soil. These methods are effective but come at a high cost and have the potential to pollute the environment.

The chemical grout materials currently used to make soft marine soil suitable for construction are cement based materials like Portland cement and lime. These options bring with them environmental concerns like contamination to the groundwater, ocean, and coastal ecosystem.

A study published in the Geomechanics and Engineering journal in February of 2019 attempted to make marine construction less impactful to the delicate coastal environment. The study looked at injecting two biopolymers: an anionic xanthan gum biopolymer and a cationic ε-polylysine biopolymer. Both biopolymers used in this study are nontoxic and used as FDA approved food additives.

Researchers wanted to confirm the biopolymers could be used for marine ground improvement and understand the mechanisms that lead to improved Atterberg limits, shear strength, and compressive strength of the soil.

The study concluded that both biopolymers are effective as soil stabilizers with some caveats. Xanthan gum biopolymer increases the viscosity and bonds soil particles together – increasing the strength of the soil. However, the xanthan gum also increases the compressibility. Researchers recommended only using Xanthan gum in shallow depths or increased the drainage in deep construction to combat the delay in consolidation. Polylysine biopolymer can be used as a soil-coagulating material by forming bridges between particles and forming larger flocs. The soil density and stability are increased when larger flocs are developed.

Multiple studies have shown microbes and enzymes could be an effective soil stabilizer. Researchers typically use cyanobacteria and microalgae, sulfate-reducing bacteria, and some nitrogen dependent microorganisms for microbial induced carbonate precipitation (MICP). The calcium carbonate crystals, also known as lime, produced bind the soil particles together – effectively stabilizing the soil.

The studies done have found this method to be highly effective and show a linear relationship between soil strength and the amount of calcium carbonate produced. This method requires large soil pore sizes in order to encourage the growth and spread of the bacteria throughout the soil. It does not work well with fine-grained soils like clay and works best in liquefiable sand.