InSAR: From Topography to Volcanos

Satellite Radar Interferometry, also known as Interferometric Synthetic Aperture Radar (InSAR) is an active remote sensing technique used in the EAC industry for developing topographic images and monitoring structural stability. Since its development, it has also found to be useful for monitoring volcanos and earthquakes, and even studying other planets. 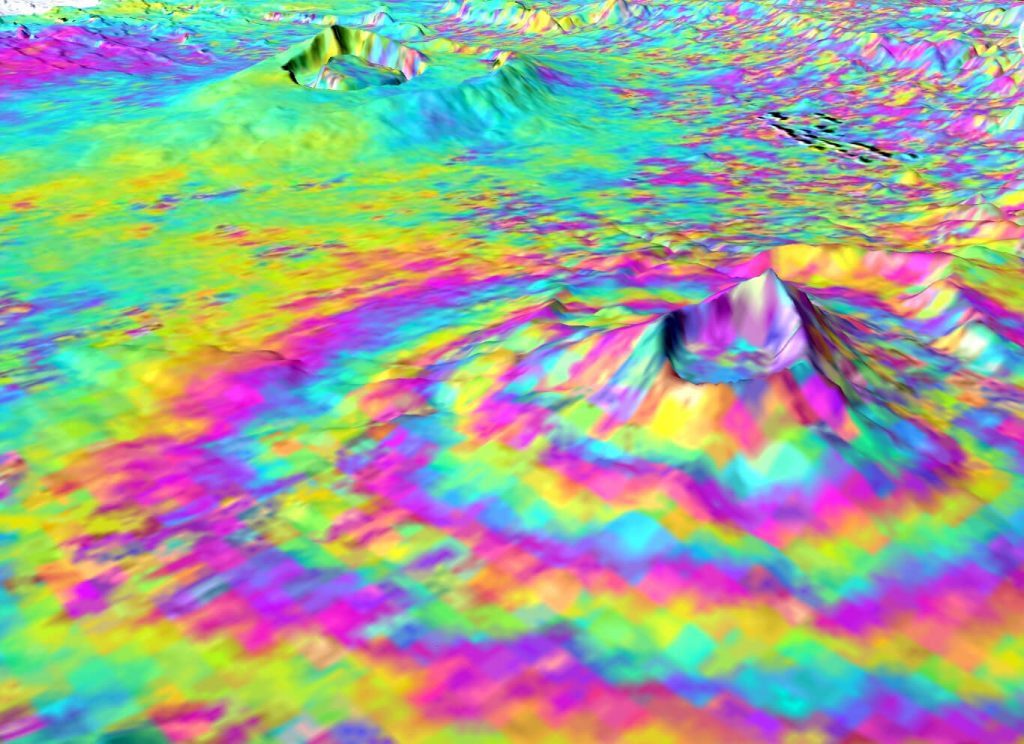 How Does InSAR Work?

Unfortunately, InSAR has a reputation as complicated and hard to understand. InSAR takes pictures of earth, but unlike normal satellite radar images, the images are in the microwave spectrum. InSAR emits “radar waves and measure the amplitude and phase (fraction of the full wave) of the reflected waves for each pixel in the image”. The use of microwaves means that InSAR can penetrate clouds and is less impacted by atmospheric conditions.

The various airborne, space, and terrestrial platforms are all based on the same technology, but satellites are most commonly used. SAR satellites launched in the 1990s now orbit the earth at 500-800 km.

“With the ability to measure and monitor down to centimeter-level or even millimeter-level scale using satellites that are hundreds of kilometers away, InSAR is both a very useful and a very impressive technology with large potential for the geomatics industry.”

InSAR can be used for digital elevation modeling using the stereoscopic effect created when two different images are taken of the same area from slightly different positions. This is very similar to the 3D effect that is created when movies are filmed using two side-by-side cameras, but with InSAR, the elevations can be measured.

In 1995, two satellites flew the same path with a one-day separation in order to create a DEM for the entire world. Antennas can also be mounted a specific distance apart on the same structure as was done on the space station in 2000.

When using InSAR for infrastructure and building monitoring you need very high-resolution data, but the centimeter or millimeter level scale that can be achieved is a huge advantage when monitoring highway and railway settlement, dike stability, and forensic engineering.

InSAR has also been used to measure subsidence, mainly caused by oil or water extraction, subsurface mining, and the collapse of old mines. Subsidence is the lowering of surface elevation around a mine due to collapsing below ground. Recently, researchers in China determined that InSAR could be used to detect illegal open-pit mines.

InSAR is being used more and more for the detection of environmental concerns, like landslides, ice flow and deformation, earthquakes, and erupting volcanos. Some volcanos are very hard to monitor and predict when it will erupt. Mount St. Helens only caused measurable seismic activity a few months before it’s a devastating eruption in 1980.

Satellite InSAR tells us there is more to see before an eruption. A study done by Princeton University found that InSAR can detect the deformation due to the build-up of magma in the volcano. Researchers concluded that “InSAR is a critical tool for understanding volcanic hazard at most of the world’s poorly monitored subaerial volcanoes as well as for searching for large magma reservoirs.”