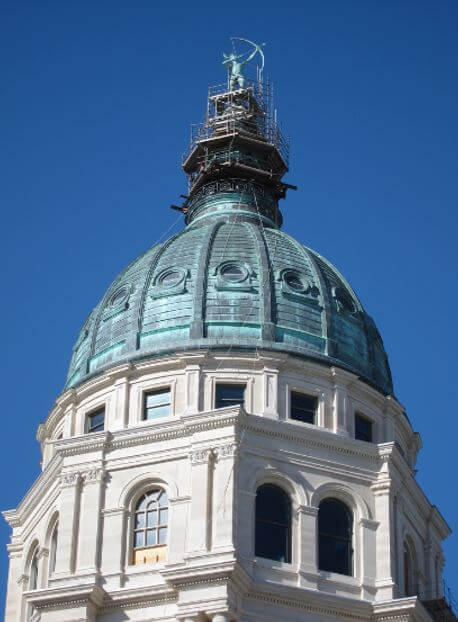 Soaring into the skyline like a majestic, shiny penny, the Kansas statehouse copper dome is a glimmering example of sustainability, innovation, and outside-the-box architectural design.  The $22 million roof replacement containing approximately 127,000 pounds of copper is the crowning glory of a 13-year basement-to-dome renovation project by the team of Treanor Architects and JE Dunn Construction.

Shortly after the ending of the Civil War, Kansas politicians set out to build a state capitol building that would rival the regal structures of Washington, DC.  Nine workers died during construction, which began in 1866 and took over 37 years to complete.

The Sunflower State is very proud of its Topeka-based statehouse, and over 100-years later, legislators were demanding a complete makeover to restore this magnificent structure to its former glory.  Their foresight and dedication were well rewarded in 2017 when the Kansas statehouse copper dome project received the 2017 Top Ten Award by the North American Copper in Architecture Awards (NACIA) for copper construction projects of the previous decade.

By the 1990s, the once-beautiful statehouse building was falling into a state of disrepair.  The limestone foundation and façade were beginning to crumble, and an F5 tornado in the 1960s had peeled away portions of the original copper roof.  Meanwhile, the remaining roof sections had transformed into a less-than-appealing dull-green patina.  Here are some other interesting facts about the NACIA award-winning renovation project.

In addition to the 2017 Top Ten Award, this historic renovation was one of fifteen recipients to win the 2014 NACIA award for architectural copper designs. The Kansas statehouse copper dome is truly a marvelous site to see.  And thanks to the creativity and ingenuity of this team of legislators, historians, architects, engineers, and construction managers, the Capitol Dome will remain impressively awe-inspiring for another 100-years and counting.