With the escalating cost of flood insurance, homeowners often look to land surveyors for Elevation Certificates to support their requests to change their properties’ flood zone status. Land surveyors need to be aware of the challenges of doing such work. 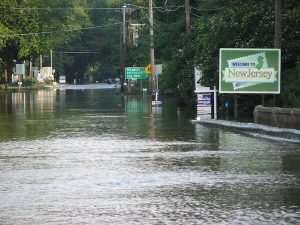 The Mid-Atlantic Flood, which occurred in June 2006, caused the Delaware River to spill over its banks and completely flood Columbia, NJ as well as Delaware, Washington, DC, Maryland, New York, and Pennsylvania. Image Credit: Twigboy via Wikimedia Commons

After the extraordinary flood damage incurred by homeowners after significant flooding events, the US Congress passed the Biggerts-Waters Act (2012), which brought premiums for flood insurance inline with actuarial risk. In response to outcry about the rapid rise in cost for insuring homes in flood plains, Congress passed the Homeowner Flood Insurance Affordability Act (2014) that temporarily delayed premium increases. While this action helped keep the 2016 median premium costs across all single-family policies to $512 and the mean to $871, homeowners often look to ways to cut or eliminate the cost of flood insurance from their budgets. Since this usually means securing an Elevation Certificate from a Licensed Land Surveyor, many surveyors in flood-prone areas are likely to have homeowners approach them for this work; however, surveyors need to remain aware of the complicated nature of doing work involving FEMA review, as well as the scope of practice concerns. 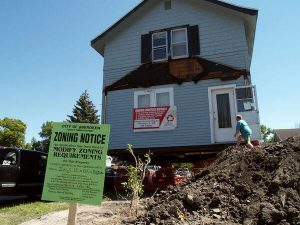 Even homeowners who do not live on the coast find themselves looking to land surveyors when making repairs after a flood event like the one that occurred in Aberdeen, South Dakota in 2007. Image Credit: Amanda Bicknell, FEMA via Wikimedia Commons

Given the scant amount of information on the Information for Surveyors page on the FEMA website, one might expect that the requirements for completing an Elevation Certificate or requesting a Letter of Map Amendment (LOMA) are relatively simple. Just one glance at the 151 page The Zone A Manual: Managing Floodplain Development in Approximate Zone A Areas, which provides land surveyors with guidelines for determining Base Flood Elevations in Special Flood Hazard Areas (SFHA), shows this is not the case.

Here is an overview of some of the issues and guidelines for land surveyors adapted from FEMA’s Engineers, Surveyors and Architects: Frequently Asked Questions page. 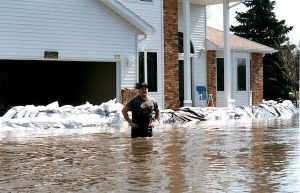 While homeowners might want to avoid the cost of flood insurance, they may regret their decision in the long run. Image Credit: Dave Saville, FEMA via Wikimedia Commons

In the December 2017 issue of American Surveyor,  Wendy Lathrop, P.S.,C.F.M. addressed scope of practice concerns related to completing Elevation Certificates for homeowners who want to reduce or escape the cost of flood insurance.

Some of the issues she states are better left to flood insurance professionals include:

Read Ms. Lathrop’s article More Questions than Answers to learn more about the concerns she raises.

What challenges do you face when doing land surveying work for homeowners in flood prone areas?