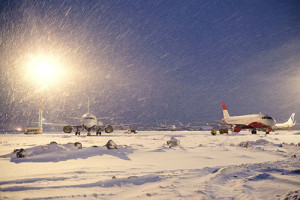 Every winter, thousands of airline passengers experience the frustration of flight delays due to icy or snow covered runaways. Three new runway deicing techniques developed by Iowa State University engineers hold the promise of making these delays a thing of the past.

If you take a flight to or from Chicago’s O’Hare airport during the winter, you run almost a 50 percent chance of the airline delaying or cancelling your flight, according the travel website Hopper. Fortunately, the FAA funded a $750,000 grant to a research team at Iowa State University’s Program for Sustainable Pavement Engineering and Research (PROPSER) to develop new techniques to de-ice runaways and reduce snow accumulation. While keeping runaway surface free of ice does not completely eliminate the possibility winter travel delays, the three new deicing methods developed by the PROSPER team may make snow and ice related flight delays and cancellation less frequent.

• Use of Conductive Concrete in Runway Construction: By running electricity through a runway made with conductive concrete, the pavement stays warm, thus preventing snow and ice accumulation.

• Embedding Copper Pipes in Runaway Pavement: Similar in concept to the first method, another way developed by the PROPSER team to keep concrete runaways warm to prevent ice and snow accumulation is running a heated fluid through copper piping embedded in the concrete.

• Application of a Superhydrophonic Coating: Since it is not practical or economically possible to rebuild runways in airports in areas subject to winter storms, the PROPSER team developed a superhydrophonic coating to simply spray on the runway. This application repels the snow and ice so they just roll off the runway surface.