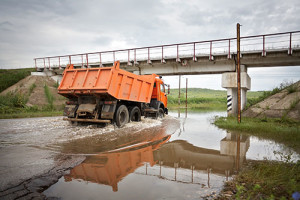 Engineers, architects, and developers involved in Federally funded projects, as well as FEMA funded post-disaster residential reconstruction, need to ensure the structures meet new flood risk standards mandate by an Executive Order signed by President Obama on January 30, 2015. What does this mean for your projects?

According to the Association of General Contractors, the Federal government has appropriated more than $1 billion for construction projects, ranging from new government buildings to roads and bridges, for 2015. Due to an executive order signed by President Obama on January 30, 2015, architects, engineers, and other design professionals involved in these projects have new flood risk mitigation guidelines they need to follow. What is the reason for these new standards and what are the new benchmarks Federally funded construction projects need to meet?

According to the National Climate Assessment, more than $1 billion worth of property and infrastructure is currently at risk to flooding. In addition, NOAA predicts that by 2050, coastal communities are likely to experience 30 or more days of flooding annually. Some examples of the structure likely to be affected by the increase in both nuisance and storm-related flooding include:

In addition, many homes in coastal area insured by Federal flood insurance program are also at increased risk for flooding. The primary reason for the changes in the Federal construction standards is to ensure structures funded by the government are at the least amount of risk to damage or destruction caused by flooding.

An Overview of the New Federal Flood Mitigation Standards

The main difference in the new Federal standards for construction projects is the change from using models using historical data to calculate flood risk to using hydrologic and hydraulic information based on the latest climate research. As a result, the elevation of structures above the floodplain will be higher than what has been required in the past. The two other options open to engineers and architects working on these projects include:

The Benefits of the New Flood Risk Mitigation Standards

While the long-term cost savings for the Federal government is clear, both homeowners and developers are likely to incur additional costs when building new structure in a designated flood plain. Many of these individuals will question how these new standards benefit them. The Executive Director of the Association of State Flood Plain Managers, Chad Berginnis, reports that the advantages associated with the changes for private individuals include a reduction in risk that their property will be flooded repeatedly. Additionally, these property owners are likely to see a 50 to 70 percent reduction in their flood insurance premiums as a result of the new Federal guidelines.

Professionals in the design-build industry need to implement these new guidelines into their plans for Federal projects immediately in order to avoid contractual and payment issues.