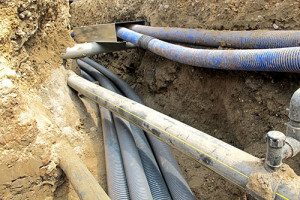 Prior to beginning any construction project, contractors and project engineers need to locate underground utilities. Since the diagrams mapping the precise location of subterranean cables and pipes are often inaccurate, what is a cost effective means of locating and documenting underground infrastructure?

One of the most critical aspects of planning for construction projects is locating the underground utilities currently existing on the site. In addition to the potential hazards, delays, and costs associated with accidental breaks in utility lines, many states, such as New York and Oregon, legally mandate contractors determine the location of underground pipes and cables prior to starting any excavation work. While many municipalities have diagrams illustrating the location of subterranean infrastructure, these maps are often inaccurate since the construction of the underground utilities occurred more than a century ago. How can engineers and surveyors create an accurate map of underground utilities for a site in a time and cost efficient manner?

The benefits of employing SUE, as outlined by the Federal Highway Administration, include the following:

The Federal Highway Administration highly recommends the employing of SUE for highway projects and encourages its use for highway construction projects by offering reimbursement for 80 to 90 percent of the cost of using SUE. In order to receive this funding, contractors working on these projects must meet requirements mandated by the Brooks Act.

A recent article in Point of Beginning describes how the San Jose – Santa Clara Regional Wastewater Facility (RWF), located in the San Francisco Bay area, used SUE to reach their goal of documenting 90 percent of the underground utilities existing on their site. The reason the management of RWF undertook this project was they found much of the existing maps and information in their GIS database was inaccurate. In fact, they found 60 percent of the infrastructure documented in their system did not actually exist.

Standards and Tools Used to Guide the SUE Project

When developing SUE procedures for this project, the RWF management used the standards outlined in the American Society of Civil Engineers ASCE C-I 38-02, Standard Guidelines for the Collection and Depiction of Existing Subsurface Utility Data. Using these guidelines allowed the engineers and survey team to assess the quality and accuracy of the location data obtained during the project. In order to minimize the likelihood of inaccurate data caused by the limitations of individual technologies, the RWF team developed a “toolbox” with a variety of different locating devices.

Examples of the locating and mapping technologies included in RWF’s Buried Utility Toolbox include:

Once the team completed the new diagrams indicating the location and type of buried utility components and evaluated the accuracy of the data, they then uploaded the information into their central GIS system. This allowed the current team members, as well as those in the future, to access the utility location they needed quickly and easily. At the time the POB author interviewed the RWF representative, the team has successfully located and documented 85 percent of the underground utilities located in the RWF site.

The post project analysis conducted by the RWF team found the advantages of using SUE and the toolbox they devised included: