Surveying History: Using 3D Surveying Techniques in the Preservation of a Century Old Alaskan Copper Mine

Stabilizing and preserving a 100-year-old copper mine and 14-story wooden mill exposed to the harsh Alaskan elements is both complex and hazardous. How did 3D laser scanning simplify this work and enhance safety for the surveying team? 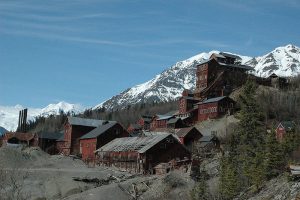 Surrounded by snow-covered peaks, the Kennecott. Alaska copper mine and mill complex is currently being stabilized and preserved by the United States National Park Service. Image Credit: Sewtex via Wikipedia

Once the most productive copper mine in the world that produced approximately 600,000 tons of ore, the Kennecott Copper Company abandoned their Alaskan operations in 1938 leaving behind a 14 story mill and numerous other buildings. In 1987, the site and mill gained National Landmark status and the US. National Park Service (NPS) purchased the site in 1998. Once the NPS acquired the property, they faced the challenge of surveying the property and buildings that were left exposed to the harsh Alaskan elements for 80 years in order for engineers to make plans for preserving and stabilizing the structure. How did the survey team complete the Historic American Building Survey and the Historic American Engineering Record the mill and its equipment safely given the hazardous conditions present in the largest wooden structure in North America? 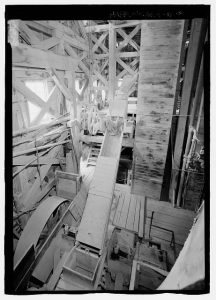 The roll crushers on the seventh level of the Kennecott Mill. Image Credit: Lowe, Jet via the Library of Congress

As archeologists mapped and photographed the mill and surrounding industrial buildings, it quickly became apparent that they would be unable to capture the details needed by the engineering team. This was due to the instability of the upper seven floors of the mill. To resolve this challenge, the NPS turned to a land surveying team that devised a blend of different geospatial solutions to capture minute elements of the site, the structure, and the tools within the building.

Some of the challenges the survey team faced and their geospatial solutions included the following:

In addition, the survey team used direct reflex measurements to compile metrics corresponding to individual points on hard to reach areas of the structure. The surveyors then compared their data to their point cloud and the pictures of the site for quality assurance purposes. In addition to providing significant time savings, the use of direct reflex measurements afforded the land surveying professionals the ability to map difficult to reach areas safely from the ground.

How NPS Used the Survey Data 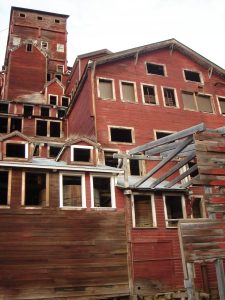 A close up of the exterior of the Kennecott mill. Image Credit: Sueswim03 via Wikipedia

The NPS engineering team used the survey data to make plans for the stabilization and preservation of the mill by replacing compromised structural beams and columns.  In addition, the agency’s cultural resource department uses the information to enhance visitors’ experience of the site. They do this by using the images, 3D data and models to create a virtual walk-through of the site.

What is your experience, if any, of using 3D laser scanning in historic preservation work?