The Future of Traffic Engineering: Will Self-Driving Car Manufacturers Share Data for Safety?

The development of safe and reliable cars requires massive amounts of data to develop algorithms to control the car in the same way a person does.

While people usually associate Google with self-driving cars, major car manufacturers plan to offer their autonomous cars to the public by the end of the decade.

Currently, Google has its self-driving cars on the streets of Mountain View, California as well as Austin, Texas, Kirkland, Washington, and Phoenix, Arizona. Telsa offers its electric automobiles with an autopilot feature.  In addition, Uber is getting ready to test driverless cars in Philadelphia.  While some people consider these examples of practical applications of autonomous vehicle technology to be one-offs, the majority of major car makers plan to offer their versions of self-driving cars to the public by the end of the decade. The US Department of Transportation made this expedited time schedule possible by releasing the premier set of regulations for self-driving cars and trucks. Despite the appearance that all that is needed to launch vast fleets of self-driving cars is to get them into mass production, a fatal accident in Florida involving a self-driven Telsa provided a grave reminder that safety issues need to be addressed before driverless cars “go live” to the public.

The Complexity of Developing a Self-Driving Car’s Brain

Self-driving cars rely on computers running software that employs deep learning algorithms, a type of artificial intelligence, to interpret data captured by the vehicle’s on-board sensors. The development of the algorithms current requires manual input of vast caches of complex data about human behaviors elicited by various visual stimuli on roads and streets. Right now, most of this information is collected during actual real-life driving sessions, annotated, and then fed into the algorithm. Since each self-driving auto manufacturer currently develops their own algorithms using their own data sets derived from different driving situations, ensuring road safety is a challenge because each carmaker’s vehicle uses its own set of rules. For example, think about how a British-built driverless car would “behave” when traveling on streets in the United States with US manufactured driverless cars. The reason for this lack of coordination is the car companies’ justifiable need to protect their proprietary information. 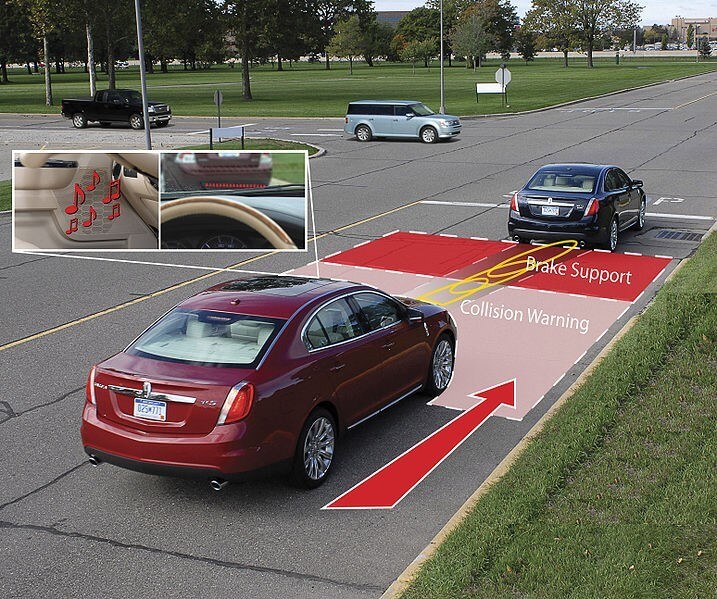 Ford’s collision avoidance system uses data from visual and other onboard sensors to determine the need to apply the car’s brakes.

In a recent article published in the MIT Technology Review, the founder of an Israeli self-driving car hardware and software business proposed a solution to self-driving automakers to share driving behavior data without sacrificing their proprietary information. He postulates that since researchers have already found video games to be useful in training the artificial intelligence algorithms used in self-driving cars, collecting information about driver behaviors in various simulated driving conditions. This method would not only provide the extraordinary amount of data needed by the car’s AI computer system, but it would also allow cars to come to market earlier since data input could be automated. In addition, traffic engineers could use these simulators to ascertain a self-driving car’s responses to different road configurations and smart traffic management technology.

Do you consider self-driving cars in your traffic engineering projects? If so, what factors do you attend to?