The Future of Urban Design: Exploring the Feasibility of Urban Agriculture 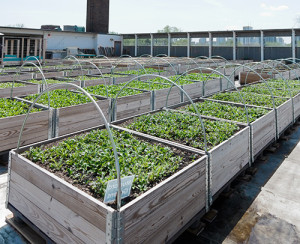 A recently released study demonstrates the promise and challenges of urban farming along the Los Angeles River. Will urban agriculture become an essential element of 21st century urban design?


When people think of agriculture in California, the northeastern neighborhoods of Los Angeles, such as Chinatown and Lincoln Heights typically do not come to mind. If the recommendations of a new study investigating the feasibility of an urban agriculture project in the Cornfield Arroyo Seco Specific Plan (CASP) zone along the Los Angeles River recently released by Perkins+Will, LA River Corps, GMAL, and others are implemented, this may change. Funded by California Strategic Growth Initiative Proposition 84, the purpose of the study was to identify urban farming projects to meet the economic and nutritional needs of the surrounding communities while attracting the interest of green developer.

The Next Step: Implementing the Urban Greening and Farming Plan


Called Urban Ag in the CUSP, the comprehensive urban greening and agricultural plan proposes a variety of projects suitable in different sectors of the 660-acre CASP zone. In addition to urban farming, the plans include recommendations for processing the produce grown on the farms, sustainable means of distribution, redevelopment of blighted areas, and local training for the agricultural jobs created by the project. Given that much of the land includes abandoned industrial sites, the planners recommend the use of hydroponic and aquaponic farming methods. The risk of contaminating produce with air pollution particulates will be greatly reduced by using greenhouses. The first project implementing the urban greening plan will break ground in Spring 2015 as a public private partnership on land owned by the Los Angeles Department of Water and Power and funded by local corporate sponsors.

The Anticipated Benefits of Urban Agriculture

According the authors of the study, some of the benefits of urban agriculture they expect to demonstrate with their pilot project include:

The success of the pilot project is likely to determine the funding of others outlined in the urban greening plan. To read more about the Urban Ag in the Cusp plan, take time to review the report here.