The Intersection between Engineering and the Environment: The Oroville Dam Emergency

After years of drought, torrential rain tested the main and emergency spillways of the Oroville Dam in Northern California. As a sinkhole grew in the main spillway, erosion threatened its integrity. When the emergency spillway went into operation, additional erosion problems occurred that raised concerns about the structural integrity of the dam, which led to the evacuation of more than 200,000 people. What lessons can both engineers and government officials learn from the Oroville Dam Emergency? 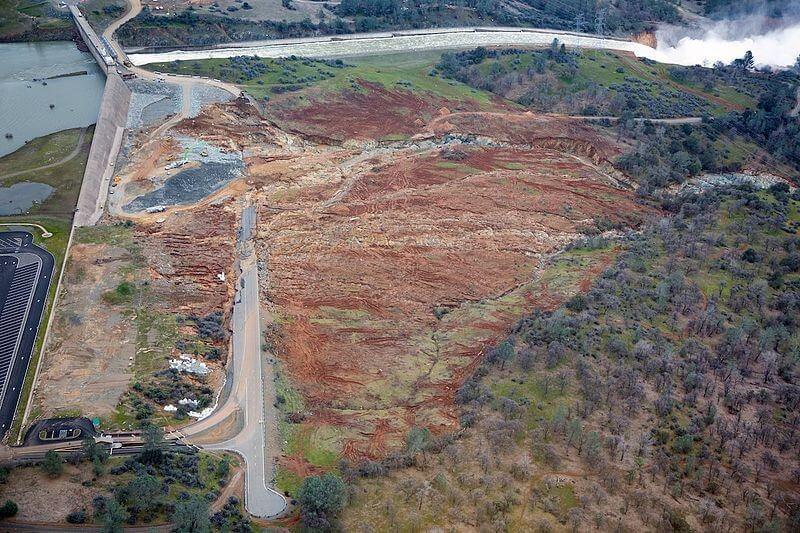 Arial view of the erosion damage at the Oroville Dam on February 16, 2017. Source: California Department of Water Resource via Wikipedia Commons.

After years of extreme drought, a series of atmospheric river fueled storms in January 2017 caught both residents and public officials in Northern California off-guard. This record-setting rainfall caused Lake Oroville, a man-made reservoir created by a 770-foot dam, to rise to a level that required the release of water into the system’s main spillway as per standards set by the Army Corp of Engineers in the Oroville Dam Reservoir Regulation Manual. From January 17th to January 30th, the water flow into the spillway ranged from 0 cubic feet per second (cps) to 10,000 cps. On January 31st, the flow into the spillway was more than 10,000 cps and by February 7th, the releases from the reservoir had reached 44,500 cps. Due to the continued torrential rainfall, an additional 10,000 had to drain into spillway to stay within regulatory standards. When increasing the outflow from the reservoir, the dam operators employed by the California Department of Water Resources(DWR) noted a significant amount of debris flowing out of the concrete channel of the spillway. In response, they halted the release of water from Lake Oroville to allow an inspection of the operational spillway.

Erosion Threatens Structural Integrity of Both the Operational and Emergency Spillways 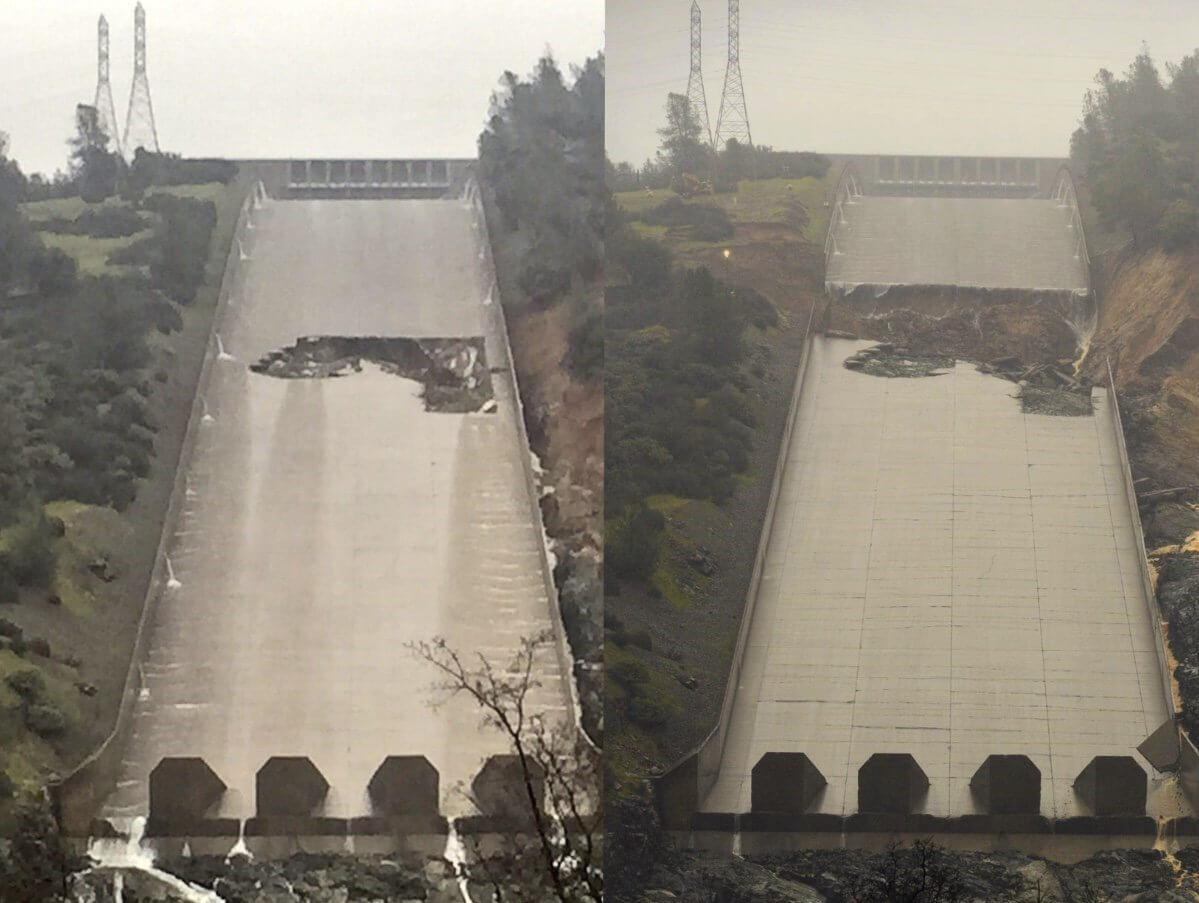 The sinkhole that developed in the operational spillway grew from 250 feet in length to 300 feet by February 9th. Source: California National Guard via Twitter.

DWR officials discovered a 250-foot sinkhole approximately halfway down the emergency spillway when they conducted their inspection on February 7th. Even though the crater allowed water to escape into the ground, which increased the risk of erosion, testing of the structural integrity of the spillway convinced DWR officials to resume the release of water from the reservoir since the heavy inflow into the lake continued due to torrents of rain impacting the area. Two days later, officials discovered the crater had significantly increased in size. To reduce the risk of catastrophic failure of the spillway, they reduced the rate of water flow into the operational spillway to 20,000 cps. Despite gradually increasing the outflow from Lake Oroville, the water elevation reached 901 feet, which resulted in the water flowing into emergency spillway for the first time since its construction in the late 1960s. By February 12th, the dam operator noticed erosion progressing along the side of the emergency spillway, which had the potential to collapse this concrete structure and allow a 30-foot wall of water to flood communities along the Feather River. DWR officials decided to increase the release into the operational spillway to 100,000 cfs to decrease the water level in the reservoir to stop the flow into the emergency spillway to allow inspection of the effects of the erosion on the structural integrity of the spillway. In addition, officials ordered the evacuation of more than 200,000 people downstream from the dam due to the threat of the spillway collapsing.  By February 15th, the water levels decreased 25 feet below the crest triggering the release into the emergency spillway and the immediate crisis came to an end and repair work began.

Video posted by the Butte County Sheriff’s Office showing the conditions at both the operational and emergency spillways of the Oroville Dam. Source: Facebook

As the Water Temporarily Recedes, A Search for Answers Begins

With continued rainfall and the significant snowmelt from the Sierra Mountains in the spring, the spillways remain at risk of failure. Source: California DWR via LA Times

Even though officials lifted the mandatory evacuation order for communities along the Feather River downstream from the Oroville Dam, they warned residents that they needed to prepare to leave again in the future. In addition to forecasters anticipating more torrential rains, the spring melt of the heavy snow pack in the Sierra Mountains is likely to cause a significant increase in the water level in Lake Oroville, which means releases into the operational spillway will be necessary. While DWR crews are working as fast as possible to repair the erosion damage as quickly as possible, both the operational spillway and the emergency spillway are still at risk of collapse if a heavy release of water is necessary. This information led residents and local government officials to question if the Oroville Dam Emergency could have been prevented.

The History of the Oroville Dam Emergency 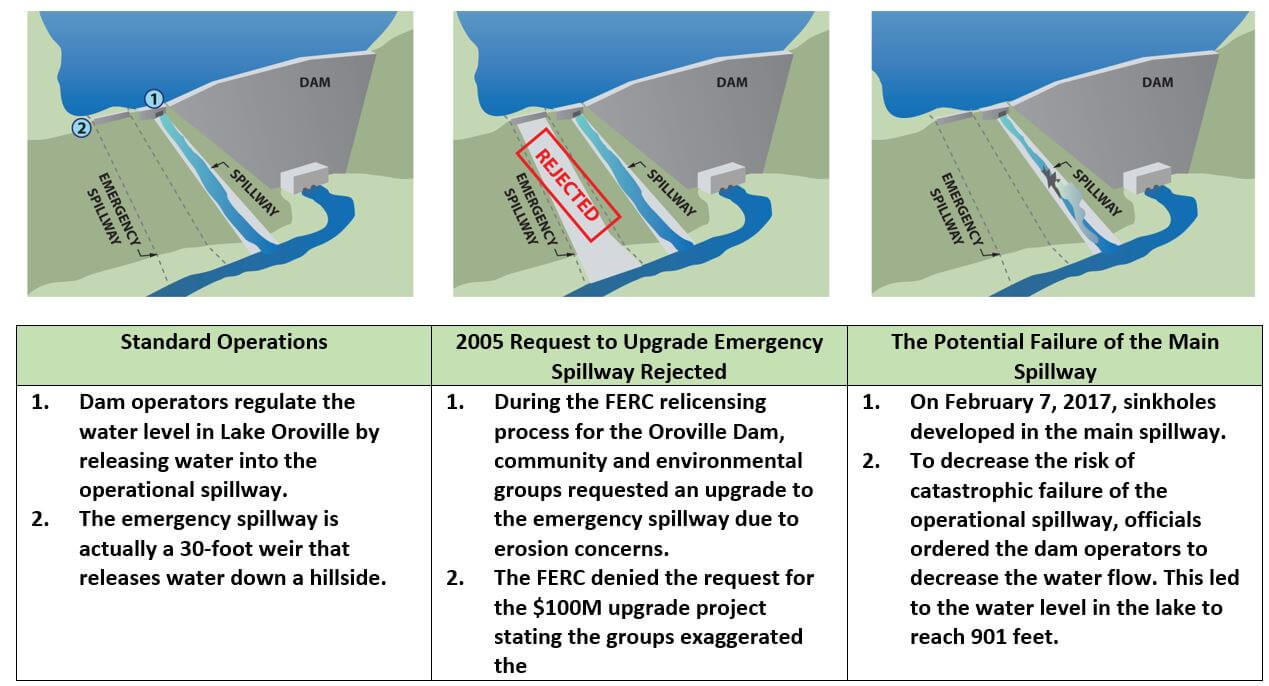 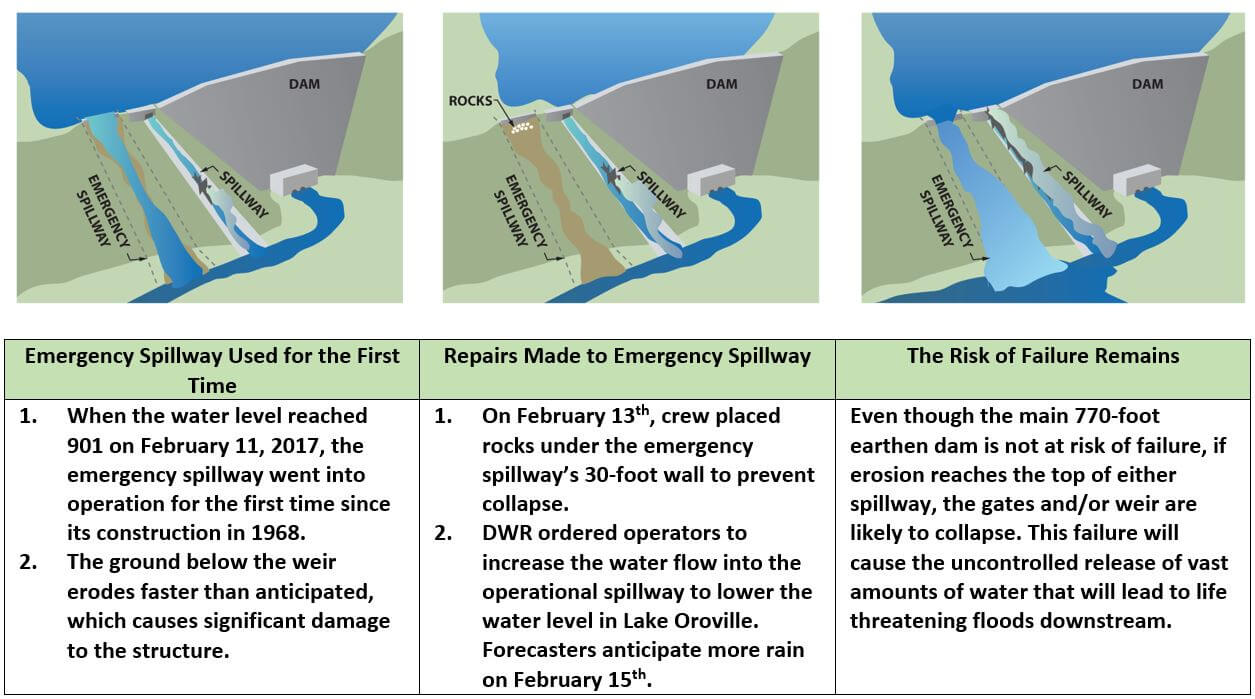 Some of the questions residents, officials, and the media are raising include the following:

According to The Sacramento Bee, the last time the US Army Corp of Engineers updated the flood control regulations for Lake Oroville was in 1970. Since these rules for dam operations do not account for the data from the two largest floods that affected the region and the advances in hydrology and meteorology, some experts suspect the old guidelines may no longer be valid. Others report that the emergency was the result of structural failures not related to the dam operation standards. In either case, many people now question safety of the state’s dams  operational procedures and the structural integrity of California’s 833 high hazard dams.

Since the Edward Hyatt Hydroelectric Plant, located adjacent to the Oroville Dam, relies on water flow from Lake Oroville to power its six turbines, the Federal Energy Regulatory Commission (FERC) licenses and provides oversight for the Oroville dam and spillways. During the 2005 relicensing process for the Oroville facilities, three community and environmental groups filed a motion to intervene with the FERC stating that the design of the emergency spillway put it at risk of failure due to erosion since the water simply flowed down a hillside . The group proposed building a proper concrete spillway to direct the water to a safe discharge location to decrease the risk of erosion and downstream flooding. The Washington Post reports that the FERC rejected the suggested $100 million project stating that the erosion issues raised by the community and environmental groups.  Unfortunately, the groups’ concerns proved to be valid.

In response to the failure of both the operational and emergency spillways at the Oroville Dam, the FERC ordered the California DWR to form a team of experts to assess the dam and make recommendations as to what is needed to improve the structural integrity of the spillways in order to prevent further dam emergencies.

What do you think needs to be done to ensure the safety of the Oroville Dam system?