Trends in Urban Design: The Rising Use of Hostile Architecture in Public Places

With the uptick in gentrification and homelessness in the United States, it is no wonder that developers and property owners are requesting that architects include hostile architecture in the designs for projects. What are the pros and cons of using design to discourage certain behaviors in the public realm? 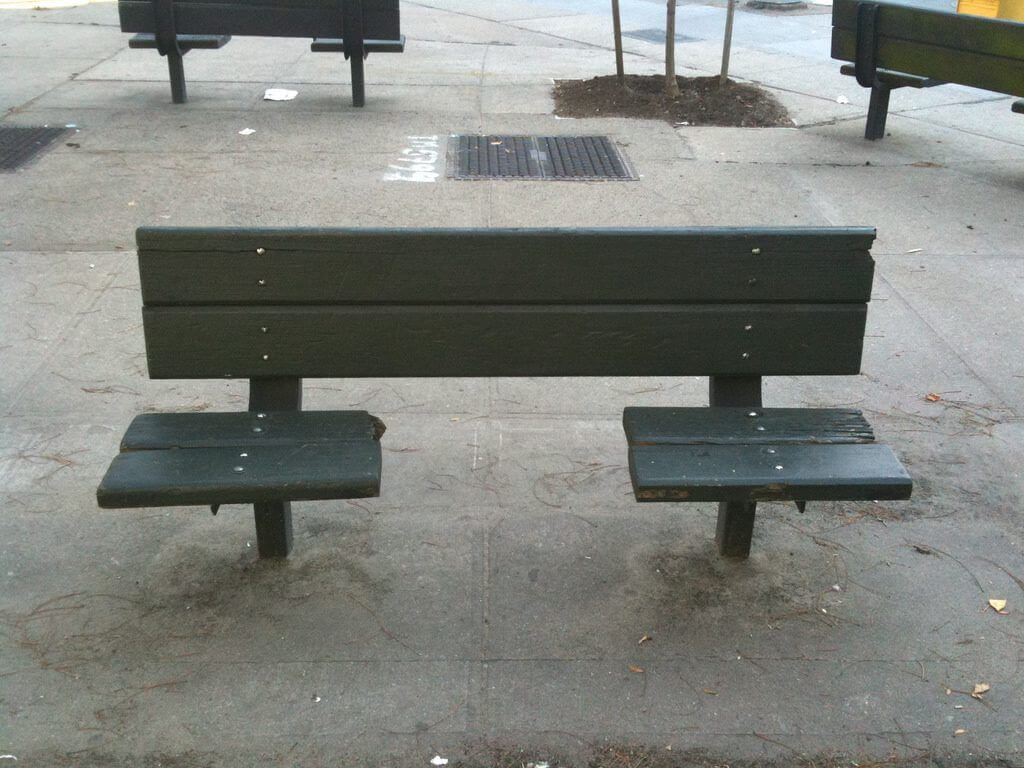 This bench with the center removed to prevent the homeless sleeping in public areas is one of the more overt forms of hostile architecture appearing in cityscapes. Image Credit: Jason Eppink via Flickr

As urban areas gentrify, often replacing low to lower middle income housing with upscale homes and apartments, many American and European cities are experiencing an increase in the number of homeless people. According to the US. Department of Housing and Urban Development (HUD), the number of homeless people in the United States rose one percent to just over one-half million in 2016, which was the first time in a decade the homeless population increased. In addition, the number of unsheltered individuals reached 193,000, constituting 35 percent of the homeless. This nine percent increase over two years means more people are living in cars, abandoned buildings, parks, and other public places. In response, many city officials, developers, and business owners are turning to hostile architecture as a means to deter the homeless and others from seeking refuge in public spaces. What exactly constitutes hostile design? What are the pros and cons of using architectural elements to shape or control human behavior? 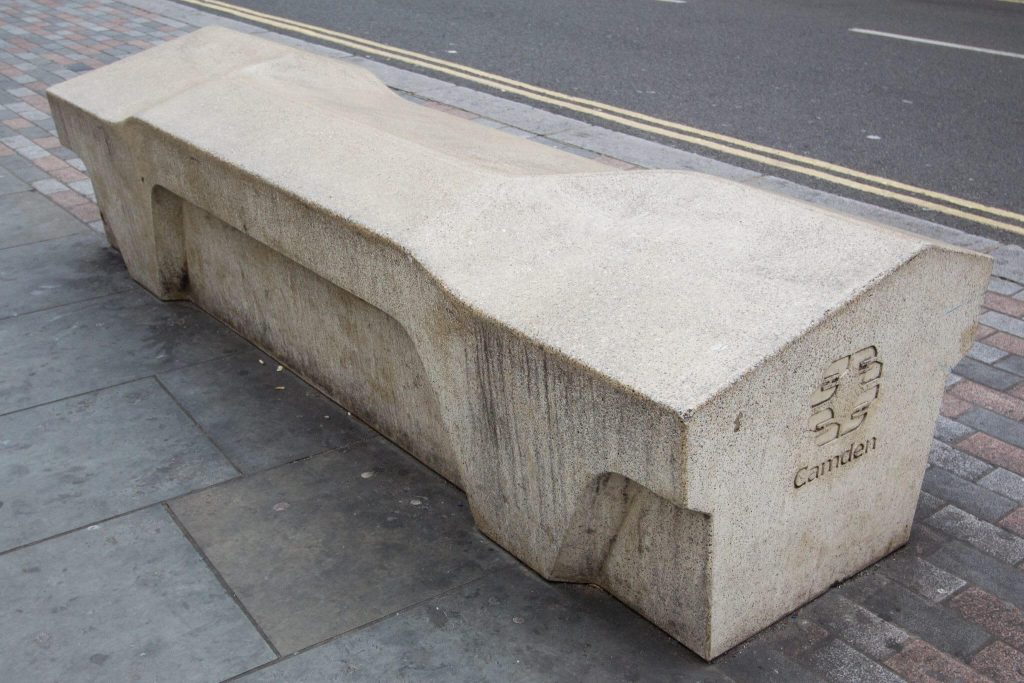 The Camden bench is one of the most cited examples of hostile architecture used in public places in both the United States and Europe. Image Credit: The wub via Wikimedia Commons

Ranging the concrete Camden bench designed to prevent sleeping and lengthy periods of sitting to spikes and bolts on walls and steps to deter the homeless from resting in the space, hostile architecture consists of design elements in cityscapes used to deter certain types of behavior. While some types of defensive urban design are overt, others are more subtle, such as aiming sprinklers at places where the homeless tend to congregate. In Seattle, public outcry forced the city to remove bike racks placed strategically under a viaduct to prevent the homeless from camping. In Vancouver, officials admit they requested hostile architecture elements as part of a park design to prevent unsheltered individuals from camping and gathering.

The Argument for Hostile Architecture 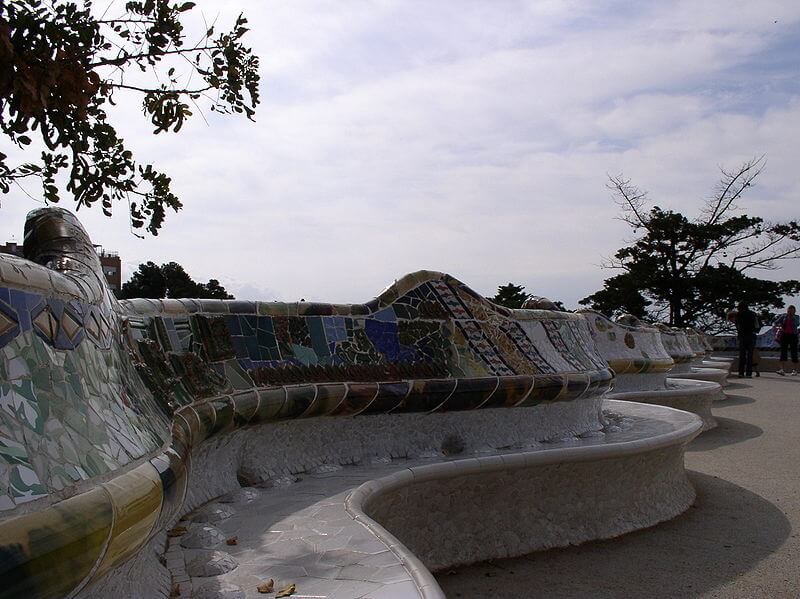 This example of a serpentine bench in Barcelona, Spain deters sleeping by not only its shape but also with lumps placed along the seating area. Image Credit: Baikonur via Wikimedia Commons

In a recent debate featured on CNN, Dean Harvey, the founder of the UK hostile bench maker Factory Furniture, outlined the argument in favor of hostile architecture. In terms of the design of the Camden bench, he explained that while the narrow sloping seating area discourages loitering and sleeping by the homeless but the block of concrete also prevents drug drops. He makes the point that hostile architecture serves as one of many public safety tools in urban areas. Others argue that by preventing rough sleeping in train stations, the hostile design protects the homeless from harsh cleaning chemicals. Business owners also tend to sing the praises of defensive design since it acts as a deterrent against aggressive panhandling outside their shops and offices.

The Backlash Against Hostile Architecture 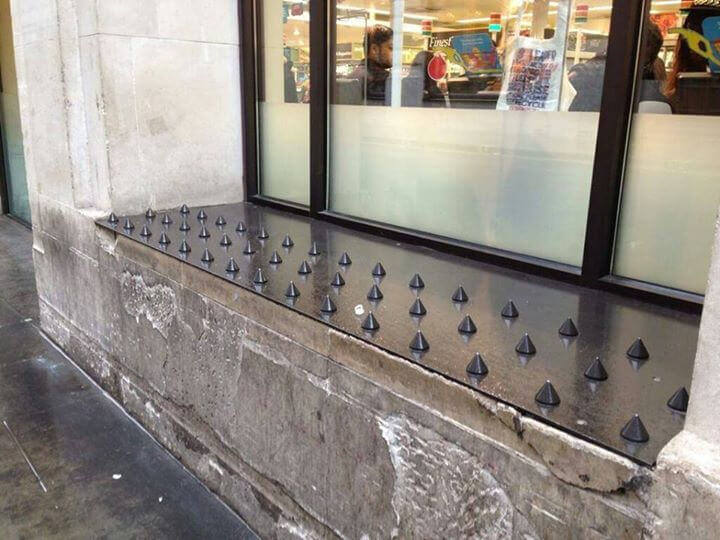 Many people consider anti-homeless spikes one of the most egregious forms of hostile architecture. Image Credit: Kent Williams via Flickr

As the use of hostile architecture becomes more prevalent, so does public awareness about the function of defensive design elements in public spaces. As a result, a significant opposition both within the professional architectural community and laypeople against using architectural elements to control human behavior, especially that of a vulnerable population. James Furzer, an architect opposed to hostile architecture who opposed Dean Harvey in the above cited CNN debate asserts that designing space to deter people from occupying it is antithetical to the purpose of architecture itself. He describes hostile architectural elements as unattractive and aggressive symbols of the selfishness of some segments of human society. He also points out that spikes and uneven surfaces for sitting are actually dangerous for children, the elderly, and the handicapped. While he admits that the role of architecture is actually not to solve homelessness and other social issues, urban spaces need to have inclusive, secure spaces for the unhoused as a temporary solution to foster the wellbeing of the less fortunate among us.

What is your opinion about the use of hostile architectural elements in urban areas? Do you have clients requesting defensive design? If so, what is your response to them?