From infill and inner-city redevelopment projects to large suburban neighborhoods, agrihoods are growing favor among developers, farmers, residents, and communities. 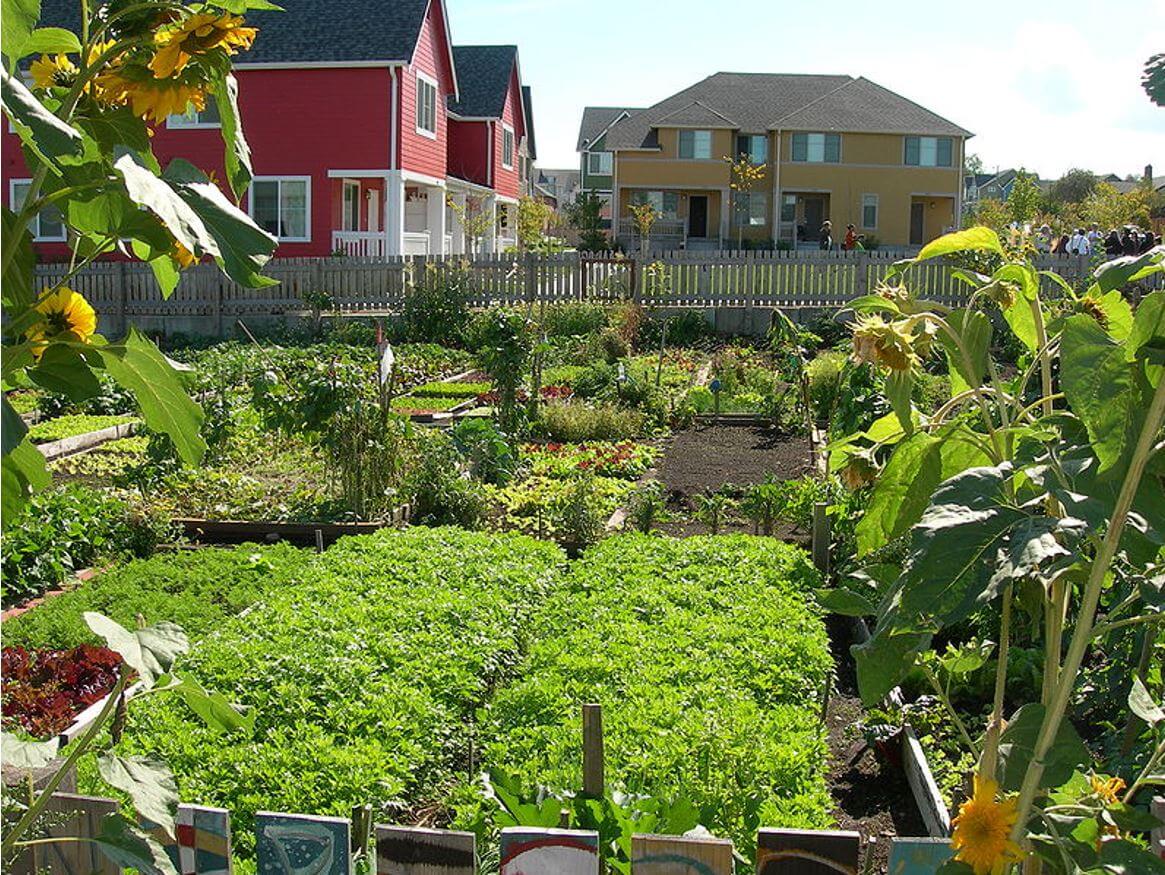 These homes surrounding a relatively small community garden in West Seattle, WA is just one example of an agrihood. Source: Wikimedia Commons

Urban farms known as agrihoods have rapidly gained in popularity as older adults look to simplify their lives, Millennials search for community, and city leaders search for solutions to blight, sustainable agriculture supported developments. These farms and produce-centric communities range in size from a dozen or so houses surrounding a community organic garden to thousands of homes on hundreds of acres of working farmland, wetlands, and open land protected by conservation easements. The architectural style of homes in agrihoods varies widely as well as the price points of the houses. What benefits do agrihoods offer that accounts for their surge in popularity across the United States?

Agrihoods Benefit Both Individuals and Communities

At first glance, people who live in dense urban areas live very different lifestyles than those who call rural areas home; however, both ways of life share a propensity to elicit feelings of isolation. Community gardens and shared farming ventures provide a means of meeting other people and forming relationships around shared activities. In poverty stricken urban areas, community gardens and vegetable plots provide a variety of activities for residents of all ages as well as serving as an oasis of free or low-cost fresh produce in food deserts. For suburban homebuyers in their 20s and 30s, agrihoods are replacing the golf and country club subdivisions that gained popularity during the mid-20th century.  Additionally, existing single homes in agrihoods have a resale value as much as 28 percent higher than comparable houses in traditional suburban neighborhoods. 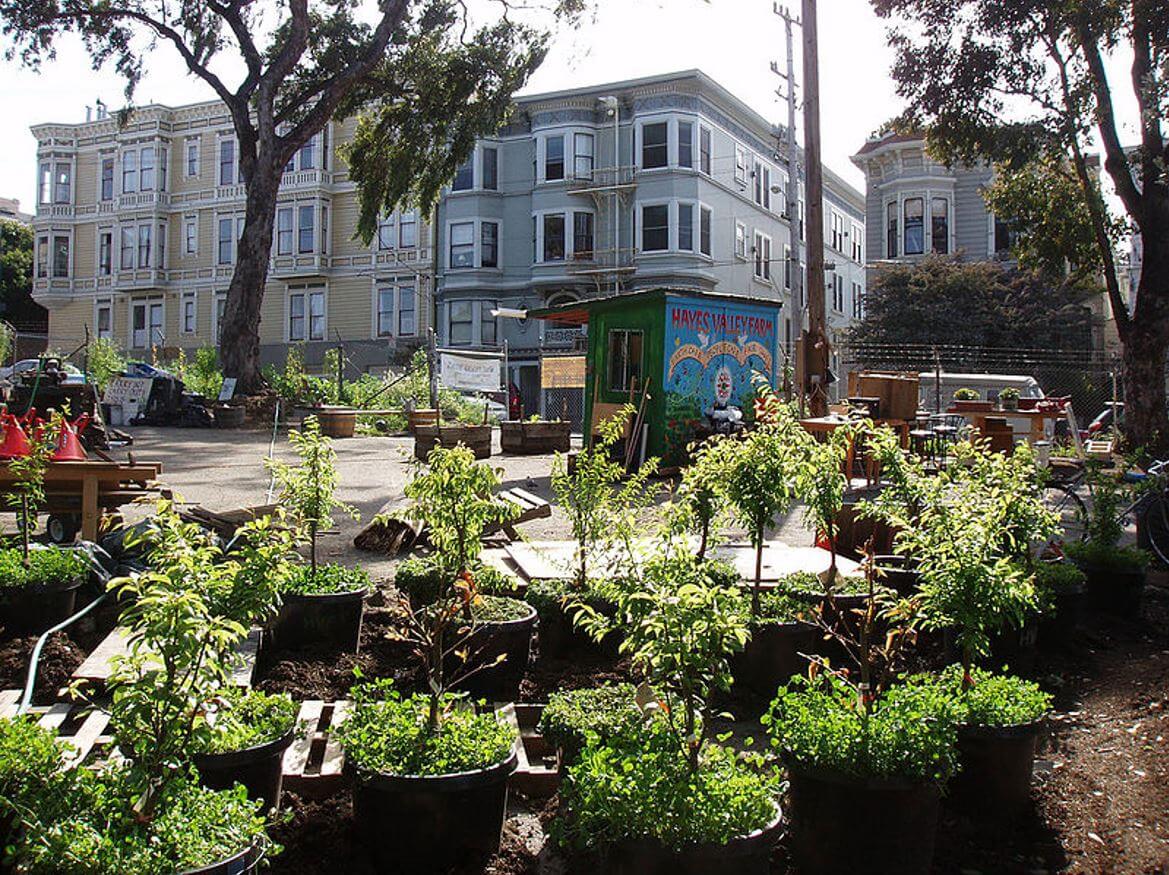 The community built and maintained Hayes Valley Farm transformed a vacant lot near the former ramps for the San Francisco Central Freeway into a two and a half acre working urban farm maintained by neighborhood volunteers. Source: Wikimedia Commons

While small urban core agricultural microhoods, which consist of about a dozen homes surrounding vegetable and herb gardens as well as container orchards, are usually the work of neighborhood non-profits and community volunteers, developers are discovering the advantages of agrihoods. Typically, a developer acquires land to build 100 to 1,000 single-family homes and to support a working farm as well as protected green spaces. While the amount of acreage required for an agrihood is comparable to a golf course community, the development costs for an agriculture supported neighborhood are one-fifth of those of a traditional suburban neighborhood. In addition, by protecting undeveloped areas in the agrihood conservation easements, the developer realizes significant tax breaks.

Mid-sized and large agrihoods also offer benefits to farmers since developments of these sizes usually hire farm managers to oversee the cultivation of crops and to manage the care of livestock. These positions offer salaries much higher than the income that farmers typically generate. In addition to financial stability, the community usually provides farm managers with free onsite housing as part of their compensation package. Farmers who work their own land near agrihoods benefit from their neighbors’ newfound appreciation for the knowledge, skill, and labor required to grow production and manage livestock.

Due to Detroit’s unprecedented depopulation and economic collapse, many blighted neighborhoods have numerous vacant lots filled with trash and debris that often serve as breeding grounds for crime. To address this issue as well as the lack of access to fresh produce, community activists formed the nonprofit Michigan Urban Farming Initiative (MUFI) in 2011. With the support of BASF, General Motors, and other businesses, MUFI repurposed two acres of a blighted neighborhood located in Detroit’s North End into a sustainable urban farm maintained by volunteers that has generated more than 50,000 pounds of fresh produce for residents, other non-profit groups, and local businesses during the past five years. In addition to their Saturday Farmers Market, MUFI also supports education with their Children’s Garden and they are in the process of repurposing an abandoned building into a community center. 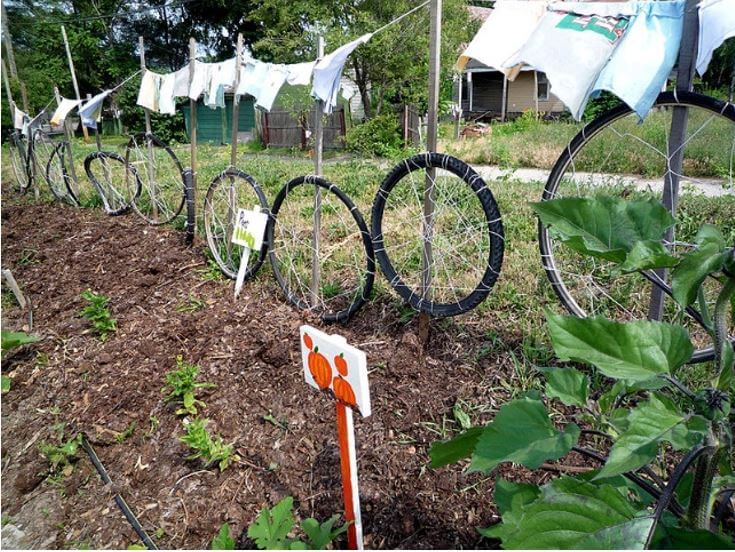 Earthworks is another example of an urban farming initiative in Detroit. Source: Wikimedia 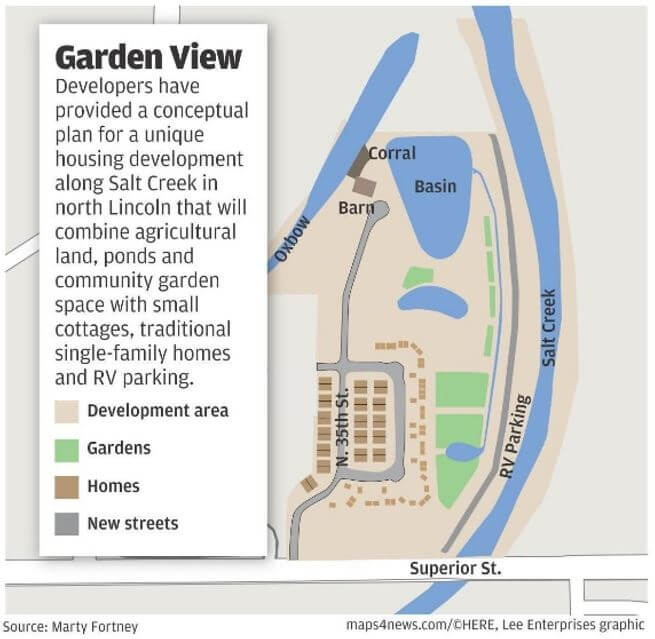 A developer recently obtained approval to transform 62 ½ acres of agriculturally zoned land located in northeastern Lincoln, Nebraska into an agrihood with 58 traditional single-family homes and 50 cottages. Approximately two-thirds of the development will consist of green space and wetlands. In addition to community gardens, this agrihood will have enough land available to support 22 large farm animals or horses. In order to make the project financially feasible, the developer’s plans include a creekside RV Park. 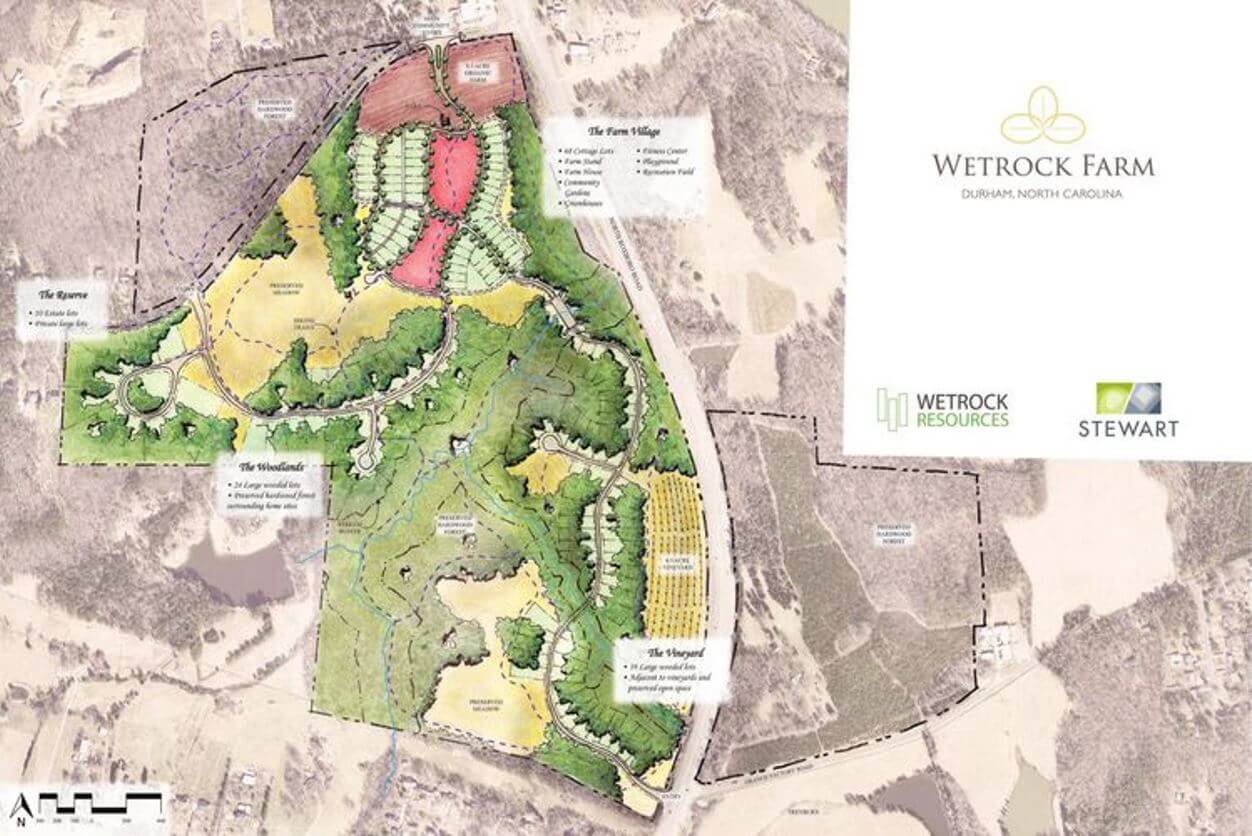 A sketch of the plans for a 230-acre agrihood just north of Durham, North Carolina. Source: Herald Sun

Ricky Bagel, the founder of the sustainable development firm Wetrock Resources, has decided that Durham, NC, part of North Carolina’s Research Triangle, is the perfect area to introduce a large-scale sustainable agrihood to the Southeast. His development, Wetrock Farm, sits on 230 acres of previously farmed land north of Durham. The plans include 140 home sites on land that is already cleared, a working organic farm, muscadine grape vineyards, a village farming center, and 100 acres of preserved forests.  While more than 180 prospective homebuyers have submitted applications, Bagel faces the funding challenges associated with most innovative mid-sized real estate developments. To obtain needed capital, Bagel is taking advantage of a real estate crowdfunding platform as he searches for an equity partner.

Do you think that agrihoods are going to be an option for urban development? Why or Why not?