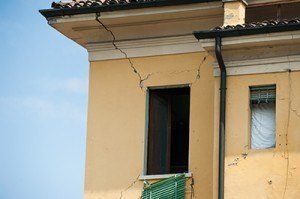 A group of engineers from Stanford, California State University, and University of California Berkeley have built and tested an earthquake resistant house they claim can eliminate the need for residential earthquake insurance.

A group of civil engineers from Stanford and other California universities recently tested their model of a two story home they designed to minimize minor structural damage caused by an earthquake. According to Engineering.com, the boxy house withstood shaking that was three times the intensity of the 1989 Loma Pieta earthquake, which registered as 6.9 on the Richter scale. The project’s lead engineer, Gregory Deierlein, reported houses built with his team’s design modifications might not require the homeowner to purchase earthquake insurance, which could save California homeowners an average of $676 per year.

The Elements of Earthquake Resistant Design
The engineers used a dozen steel and plastic sliders set into a galvanized steel units to create a system of seismic isolators. The house, built with unibody design and extra strength walls, slides along these rollers when the ground shakes, which prevents the collapse of the structure. In addition, this design also prevented minor structural damage to stucco, wall finishes, and cabinets, which is the most common type of earthquake damage cited in earthquake insurance claims. This design was used to build the San Francisco City Hall as well as the San Francisco International Airport to minimize the risk of earthquake damage.

The engineers report their design can be incorporated into new residential construction immediately. The cost of the modifications would be $10,000 to $15,000 for a 1500 to 2000 square foot home.